Making The Most Of Inventory

When using Ansible to consume APIs such as cloud services, the logic runs from the controller machine. As a result, people tend to think that as this runs locally, using hosts: localhost is the best option.

In reality, using localhost as your host loses you a lot of power. To avoid this, we can use a ‘runner’ pattern, where a runner is a local target on which you can hang inventory.

In our environment we tend to be either managing whole environments (e.g. provisioning an entire network) and infrastructure components within them (load balancers, database servies) or specific applications.

or, in picture form: 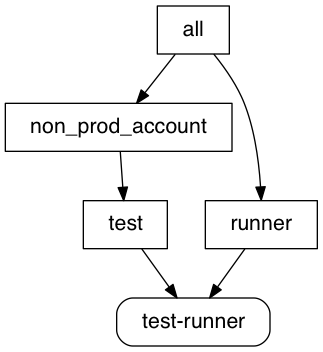 That way, when we use hosts: test-runner we can pick up all the inventory associated with the test group - the CIDR prefix of networks, the tag to use for Environment, DNS zones, and many many other things (in reality a lot of our variables come from the all group but with the env property used in populating variables - so our VPC name is {{ env }}-{{ cidr_prefix }}.

With applications, and the right inventory structure, we can do things like create all the loadbalancers with: 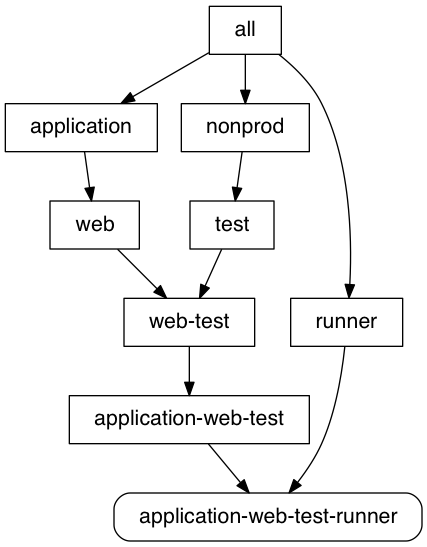 Using the runner pattern allows us to avoid a whole bunch of variable files, and structure inventory in a logical hierarchical fashion, making use of inheritance to minimise repetition of data.

One disadvantage of the runner pattern is that it creates a ridiculous combinatorial explosion of hosts and groups in inventory files. In my next post, I’ll show a very simple solution to that.

Oh, and ansible-inventory-grapher is currently working reasonably well against Ansible 2.4 at last (I need to tidy some magic variables from the host before it’s totally ready for release, but it’s on the ansible-2.4 branch if you’re keen)