One of the most common things to configure in an application is some kind of credentials based connection. Typically this will be to a database or an API endpoint, but it doesn’t really matter too much - the examples in this post will be database configuration, but the principles are the same.

I’ll use the same example from the previous blog post and also put the configuration into the same github repo.

For simplicity’s sake, we’ll assume we’re trying to write a file called config.properties that has database configuration in the form of a simple jdbc type URL - e.g.

In terms of things that remain the same between environments, the DB type, DB name and username are likely to be consistent, and password, DB servers, and possibly port will vary. It’s very likely that DB type will be so consistent that we might hardcode it in the template rather than having unnecessary templating (there can be a temptation to template everything but the principle of YAGNI applies)

Between DBs in the same environment, there is little in common, but if more than one application uses the same DB then they might share configuration (possibly with different usernames and passwords, depending on security and monitoring requirements).

In terms of the location of credentials, we’ll store everything in the flat inventory files, with the exception of DB passwords which will be stored in separate variable files (in a separate repo, or even using ansible vault) 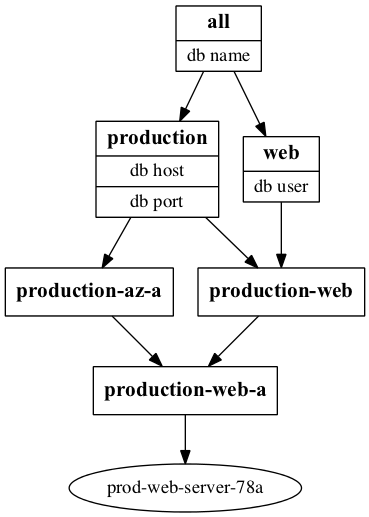 There are a number of ways to achieve this in Ansible.

We can use hierarchical dictionaries of properties to configure properties in a slightly nicer fashion - rather than have variables named customerdb_dbname we can have a customerdb object that has a dbname property. And the storedb will have similar properties.

Set hash_behaviour to merge for this to work

This version of the template is more sophisticated (and more complicated) but allows both DB connection strings to be expressed in a for loop. The modelling of the credentials (see below under Secrets) allows us to map per-database usernames and passwords.

Before we use this template, we’ll discuss how we handle secrets.

There are a number of approaches to storing secrets. We’ll show the old way by way of illustration so that we can run the playbook and generate the properties files.

I’ve actually committed dbsecrets.yml to the ansible-ec2-example repo for illustration, but it to keep sensitive information out of the playbooks repository it would perhaps be in a separate, more locked-down repo.

Running this then generates two almost identical configuration files (the order of the two DB configurations is not guaranteed - which shouldn’t matter in general).

Ansible vault allows you to encrypt your secrets with a password. These encrypted files can then be safely part of the repo.

The Ansible vault documentation is excellent and so as per usual, this is purely for expository purposes.

Should I then wish to edit the credentials, ansible-vault edit dbsupersecrets.yml will work. I used the excellent password ‘badpassword’ should you wish to follow along.

Finally we can check this with a playbook that uses dbsupersecrets.yml and run ansible-playbook with --ask-vault-pass

And voilà, config properties files with the much more secure password of ‘Ch4ng3M3!’.

I realised my credentials modelling takes no account of environment. One simple way to do this is to store the environment name in the environment config file (i.e. add “env: production” to production.yml) and then have a hierarchy of vars files e.g. ../../secrets/production/dbsupersecret.yml

The nice thing about how Ansible Vault works is that you can choose to just encrypt the files under the production directory and have cleartext versions for dev and UAT, and the same templates and playbooks will still work (you only need to then pass –ask-vault-pass when running against production)

I’ve updated the github repo to reflect this, but the main change is to the location of the credentials files and the playbook: